The plan was to go by motorcycle from Europe to Australia, so why Sudan?  I thought I'd try something new, to go from Sudan to Yemen then on to Oman and take a ship to India.  But why not the old Hippy trail through Persia?  Easy to answer, the Iran borders had been closed for political reasons.

So I took a ferry from Venice to Alexandria and rode a quite relaxed trip to the Sinai peninsula and back. I then took a ferry over Lake Nasser to Wadi Halfa into Sudan.  At this time Sudan was a less travelled country with dirt roads, the infrastructure was poor and the authorities were suspicious of foreigners.  I headed south along the railway line, GPS was not on my agenda at this time, in Atbara I turned east for Port Sudan where I hoped to find a boat to take me to Yemen.  Well it was September, the hottest month in the desert and if I say hot I mean unbearably hot, I couldn't sweat anymore, I mean I did but the sweat vaporized as soon as it came out of my skin.  I drank water straight from the Nile aware that the river was polluted but there was no other way to replace the water I lost.

Anyway I made it to Port Sudan and then came humidity with the heat.  For the first time in my life I booked myself into a hotel with airconditioning and recovered well from the strain.

I couldn't find a ship which would take me to Yemen so I decided to go to Khartoum and try from there to fly out of the country in any direction which suited my plan to go to Australia, but in Khartoum the same problem as in Port Sudan, no way out!

So the only way out of Sudan was the way I came into the country, back to Egypt.  To do this I needed petrol, not much - 60 litres would do but the petrol stations in Khartoum had been dry for a while, only ambulances and taxis got a limited supply.  The Muslim north was at war with the Christian south and all the imported petrol/diesel from Saudi Arabia went direct into the tanks of the war machinery, civilian life suffered a lot.

I went to the authorities who issued permission for fuel vouchers to get some petrol, in the office there I took the wrong door, or was it the right one!?!?  I don't know but I was in the middle of a computer stuffed control center which was the biggest I have ever seen …. the contrast couldn't have been bigger between citizens and their authorities.  In the end I got the petrol and I was off to the north.  Heavy rain with flooding made my way difficult so I rode long distances on the railroad tracks at 60km/h, a pleasant ride.  On the second day I overturned on the bike and broke my collarbone, it was still hot and I was exhausted, my thoughts circled around Alaska and icebergs.  I was alone and had no choice, I repaired the bike, managed to stand it up and drove on, after another day I arrived in Wadi Halfa and missed the ferry boat by one day.  I waited one week and got pampered by the locals, I will never forget how helpful these poor people were! In Egypt I stored the bike with a development worker and flew to Germany to get the collarbone fixed.

Four weeks later I flew to Egypt again to get my motorbike back.  After one day on the road an oncoming truck overtook another truck on a corner, I had no chance but managed to squeeze between the overtaking truck and a lamp pole before I hit the rear wheel of the truck with my motorbike panniers.  I came off the bike and landed hard on the road, I was conscious and realized there was blood on my arm …. the elbow was broken with an open wound, I realized very quickly that in this hot environment an open wound would be deadly.  Police came and made a protocol all in Arabic, I couldn't understand anything but knew when I was sitting in the Police office with blood tripping on the floor that I had to get out of there asap.  I signed everything and was free to leave.  Now I was allowed to go to the hospital another shock, they stitched me up without narcotic but at least with a new needle, in a room which was really dirty. The worst thing was when the Doctor explained to me how they would fix my elbow, simply with a wood crew ... that was when I realized I could not become unconscious and had to  get out of there.  It all sounds funny afterwards but at the time it was life threatening for me.  I got out of the hospital, took the night bus to Cairo, booked a flight to Germany and went to the same hospital I been with my collarbone.  I got the same room, the same doctor, the same nurses …..

I was lucky because when I arrived in the German hospital I already had an infection in my arm and spent six weeks clearing the infection before an operation was possible.  Today my arm is fine and the motorbike was picked up by German AA.

Three months later I flew to Asia for a backpacking trip but thats the next story. 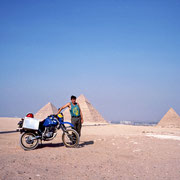 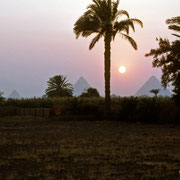 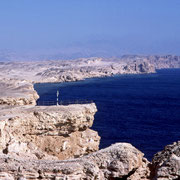 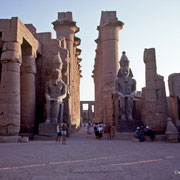 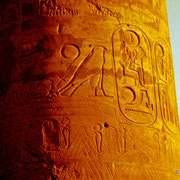 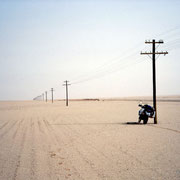 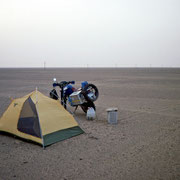 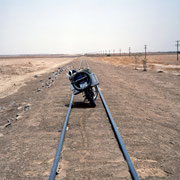 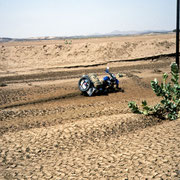 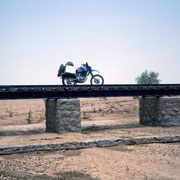 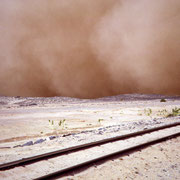 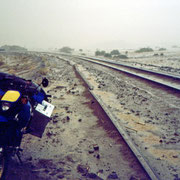 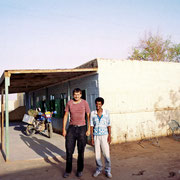